With the allure of eCommerce, brick and mortar stores can seem less relevant. But – particularly when it comes to apparel – physical stores remain incredibly relevant. Consider too that America’s top apparel stores all have a strong brick and mortar presence.

Traditional stores no longer define retail. Apparel retailers now flourish online, with customers flocking daily to the web to browse and price shop. The eCommerce trend continues to grow, with analytics firm comScore reporting a staggering $53.3 billion worth of sales in November and December of 2014 alone.

Why then do brick and mortar stores remain viable options for retailers?

Brick and mortar stores refer to the physical representations of a brand which are traditionally built, of course, of brick and mortar. These stores once dominated every city. They were the only options to shop other than ordering from a print catalog. However, physical stores have seen a sharp decline within recent years, with eCommerce marketing revving up sales and consumer interest.

Traditional stores, however, offer two distinct advantages over their virtual competitors – and these benefits prove the ongoing necessity of street-side branding: A lot of people see (the) Internet as next-generation and brick-and-mortar as being traditional. The way we see it is as a physical space that we can leverage to communicate our brand value.

When it comes to clothing in particular, consumers like to touch, feel, and try before they buy.

Customers will browse online but, if they can, many prefer to come and buy in the store. Our online store gives us greater reach to faraway places, but in the store we can build closer relationships with our customers by spending time with them.

These factors combine for steady sales and increased loyalty, which are always needed.

The 10 at the Top: America’s Favorite Retailers

Founded in 1947, H&M is a global phenomenon, generating over $23 billion in sales in 2014. Its 305 US stores consistently experience high profits, and expansions are imminent.

Founded in 1977, American Eagle Outfitters (and its sister store, Aerie) proves resilient to the eCommerce trend. This store accumulated $3.28 billion in 2014, with both total gross profits and total net profits increasing.

Since 1977, Victoria’s Secret has served as a premier specialty retailer in the United States. It earned $5.2 billion in 2014 and now experiences ongoing expansion throughout North America.

Since 1980, Express has maintained a strong, localized presence within the United States. As a leading provider of young adult clothing, it achieved $2.2 billion in sales during the 2014 year with only 600 stores.

Founded in 1918, NY&C delivers chic women’s wear to the U.S., with a focus on specialty apparel and accessories. During 2014, it generated $938.2 million across a network of approximately 500 stores.

Established in 1976, TJ Maxx emphasizes low prices and high inventories. Its diverse range of clothing and accessories makes it extremely popular, with over $27 billion in worldwide sales in 2014.

Since 1972, Kohl’s has defined the department experience, with its 1,200 stores dominating the United States. In 2014, it accumulated a staggering $19.03B in net sales.

Founded in 1858, Macy’s remains a leading force in mid-range apparel and home accessory sales. It ranks as one of the largest U.S. department chains, earning $27.93 billion in 2014.

Established in 1895, Reebok serves as one of the United States’ most iconic footwear companies. Through retail, wholesale, and outlet options it delivered strong 2014 results: $3.785 billion.

Since 1901 Nordstrom’s has served as an undeniable force in upscale fashion. Its dedication to designer brands and superior service generated $12.28 billion in 2014.

These stores prove the vitality of the brick and mortar format, achieving profits in-store rather than exclusively online. They also highlight the viability of traditional street-side sales.

The use of eCommerce stores offers many advantages – brand awareness, seamless transactions, and broader geographical appeal. However, if you want to become a top apparel retailer in America, relying purely on this format isn’t recommended. Brick and mortar stores:

Brick and mortar remains a thriving, valuable part of any company.

Ready to up your game by optimizing the fitting room experience? Download our guide below. 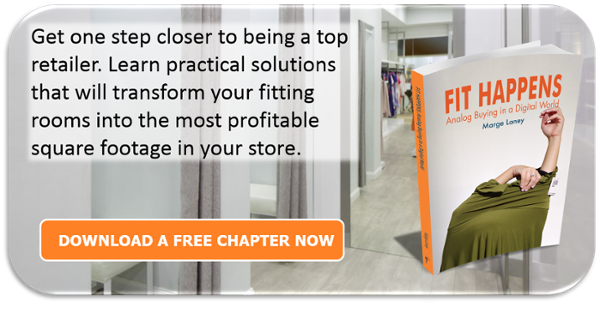